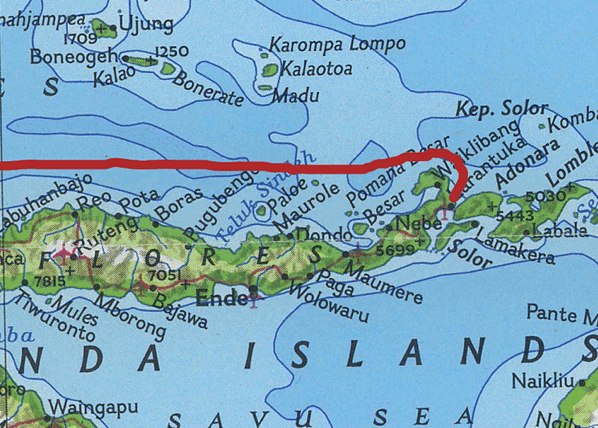 August, 1993:For weeks I'd traveled eastward across Java, Bali, and the Lesser Sunda Islands. But it was time to head back to Java to begin work and an adventure of a different sort. Evaluating my choices from rural, remote Larantuka, Flores, my options were stark: the next Pelni ship wouldn't reach Surabaya until far too late, and getting there sooner meant retracing my steps across dozens of long bus rides. Wandering around the port town I made a friend in a young Flores teenager interested in practicing his English with me, and as I described to him in Bahasa my predicament, he proposed what was soon to become one of my best adventures ever, unsurpassed on three continents. "Because we are friends," he explained, "and I want you to be alright."

Down in Larantuka's busy port, a tramp steamer bound westward through the Flores Sea for Surabaya was planning to slip its mooring later that night. Gusty, his older brother, and I located the captain and struck a deal. The K.M. Nagimulia – about a hundred and twenty feet along the water line and looking well-loved but well-worn – was off with a load of copra, plus a few bits of miscellany like a beat-up old car. Another bit of miscellany was me: a young adventurer bearing nothing but a sun-bleached backpack, a journal and pen, and a paperback or two. Money exchanged hands, muffled conversations settled the terms and conditions, one of which was clearly the fact that my presence on board would go unreported, and I'd stay out of sight when necessary. Later, when a customs inspector saw me, I noticed more money exchanging hands. We departed on the eighth of August, not long after sunset, to cries of "bebas mereka!" ("we're free of them!") and before long the harbor had slipped below the horizon and we were headed westward in unruffled seas.

I bunked with the ship's first mate, on a straw mat on the floor. We'd grow to be friends over the next few days, but I grew to like all of the rest of the crew as well. Though I'd have prefered to sleep on a bench outside they wouldn't hear of it, and each of them offered me their cabin. And given my limited nautical vocabulary they did their best to explain things to me as we sailed westward, like why we were passing a small islet on its port side (huge coral reefs to starboard), related the stories that accompanied the islands and islets we crossed (landslides that buried towns and left farmland barren), and explained to me the differences in the ships that crossed our paths, from battleships of the Indonesian Navy and laden oil tankers to the Bugis sailboats (the legendary and well-feared perahu pinisi) under multiples sails. "Orang kapal baik-baik" they said to me: "seafaring folk are nice." I couldn't have agreed more, and the fact they all hoped I'd introduce them to an American woman for marrying made little difference. 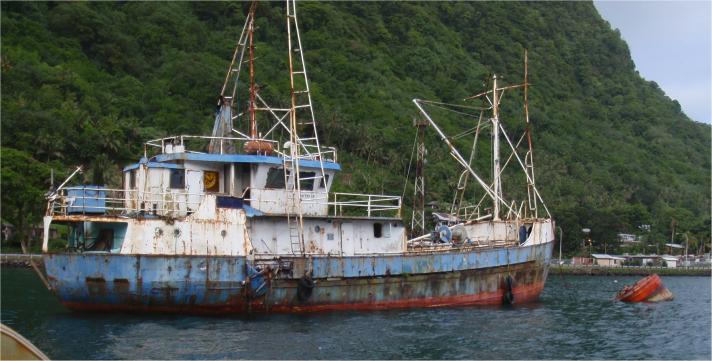 The ship was nothing special: I can find no trace of it, but this picture approximates it (although this photo is of a derelict freighter, whereas the Nagimulia was well painted and well-loved).1 I often retreated to the cabin roof for solitude (once scaring the captain, who feared I'd fallen overboard in the night). The chief engineer took the time to give me a tour of the engine room – boasting an obviously well cared-for diesel behemoth blowing its exhaust through two ports in the transom and cooled by two separate sump pumps (the pumps discharged through blue plastic tubing that snaked overboard, and were nothing greater than you'd use to clear out your flooded basement after heavy rains). The engine room was an oven, but this, in a nutshell, was Indonesia (and much of the rest of the developing world, too): there is no time for esthetics in a world where all you need to do is keep the water pumping. And this within hailing distance of a wooden sailing ship manned by the Bugis people, famed for their brave sailing in Southeast Asian waters.

The Bugis get in trouble all the time, I was told, for fishing in foreign waters. Their excuse is always the same: they have no idea where Indonesia ends and other nations begin: they just go where the fish are. The captain of the Nagimulia was not too far removed from the same mentality, I found. I took advantage of a visit to the pilot's booth to check out the navigation materials, a passion of mine for ages. I found, to my horror, nothing more complicated than one photocopied nautical map of the area produced by the Dutch at the turn of the century, a pencil and eraser, a tinny, Chinese flashlight, a nautical compass, and a few packages of kretek cigarettes. Radios, GPS, sextant, harbor approach guides? None of it, and I wasn't even too sure about the flashlight.

None of that mattered, of course, because this crew knew the sea and the route and the ship like the back of their hands, and they sailed in Allah's hands. As did I, for that matter, as my skin tanned and my blonde beard lengthened under the tropical sun. The crew shared their meals with me: rice with fried fish one day, and rice with fried egg the next. I was constipated before we reached the northern shores of Sumbawa, which was no ordeal because the ship's toilet consisted of two flat footrests along the transom and a rope from which you hung, suspending your bottom over the ship's wake.

The seas were calm. This was the "East Season" they explained to me in Bahasa: given the regularity of the Monsoon winds, during these months the wind and waves were from the Pacific side, and the rains would soon be upon us.

Sumbawa slipped by over the course of nearly two days' sail, Lombok passed in the night under tropical stars. But in Bali, we had a visitor. We were in the western Bali Sea when there was a shout and a crewman came to fetch me with a sense of urgency that I knew something interesting was about to happen. He took my arm with a calloused hand and pointed out to sea. I saw it first in a light blue patch on the otherwise dark blue sea surface, and then it emerged as the whitish blue flank of an enormous whale. Sometimes a little fin would break the surface with a splash as the creature rolled onto one side or the other and splashed around. It was beautiful – the first whale I'd ever seen in my life. Later in Bali I bought a silver whale's tale pendant for myself as a souvenir of the moment: whales north of Bali are extraordinarily rare, as they tend to stay further east in the archipelago where the waters are cooler and deeper.

Not long afterwards night overtook the ship, which was rocked by some waves that were bigger than usual. Two hours after I'd first gone to slep the machinery under the deck was rattling, and the chains that managed the rudder began making such a clatter I was certain and of them must have snapped and we were flailing around at sea. "Aman, aman" I was told ("safe, safe"). I told them not to worry: I wasn't concerned. But I looked around at the number and quality of life rafts and lifeboats and wasn't reassured. This is Indonesia.

The next morning Maduras was already well astern, and our destination port loomed. But it took the entire day to navigate the ship traffic, make our way into the harbor, dock, and deal with ship formalities (the latter of which I remained safely stowed in a locked cabin for). Then with some sad goodbyes, I debarked. The crew was off to a gin joint and, bless their hearts, they invited me to join them for some well-deserved drinking. I doubted I'd match their abilities at that one, and imagining something out of a Joseph Conrad novel, headed instead for a losmen (guest house) I knew well so I could catch the morning train back to Yogyakarta.

In Yogya I'd have other adventures to handle: settling into a small village and the routine of a satisfying teaching job, learning about daily Javanese life, and working on my Bahasa. But I'd carry this adventure with me for the rest of the year, and for that matter, for the rest of my life. Thor Heyerdahl once said you cannot possible understand the sea until you have traveled along its surface, weathered storms and darkness and come to grips with fear. This trip cemented in me a love and appreciation for the simple and hardworking people of Southeast Asia, gave me an unparalleled appreciation for life and survival in the developing world, and furthered the love for the sea that has been a part of me since I was born on the Atlantic shore. A happy marriage and two children later, I'm not sure I'd take the same risks. But just that moment in time – sunbleached, riding the cabin roof of a copra freighter plying the waters north of the Lesser Sundas with nothing more than what I carried in a small backpack – remains one of my best.

[1] Many thanks to the folks at SV Galena who snapped this photo of a derelict freighter in Pago Pago. It's the closest thing I can find to the Nagimulia, of which there is no trace, even in Indonesian.