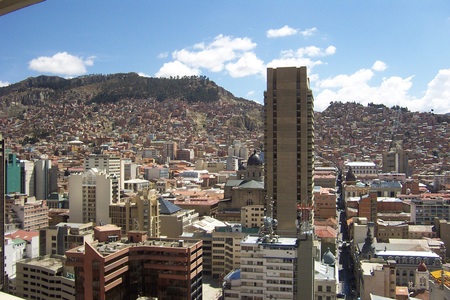 I managed the pre-dawn arrival to La Paz despite being wedged in the middle class of an economy class seat between two weirdos. The first woman was terrified of flying and threw a blanket over her head and trembled the whole way. The other woman was clearly on drugs. Commercial flights are the worst.

La Paz was exhausting and stunning. So high up! And I wound up in a 5th floor hotel room that took me even higher. I’d been warned about altitude sickness and had come armed with some gingko biloba drops, but never really needed them. In fact, the only time I ever really noticed anything was when I stood up quickly to rush for the elevator and arrived feeling winded. The air is thin up there, after all.

La Paz was clean and pretty, but the streets were choked with vehicles and the sidewalks were choked with people. I can say this: there is no better place on earth to be stuck in a suit and tie. The temperature was lovely.

It’s hard to understand the elevation, since it’s all relative anyway. Again, this disconnection with one’s geography is the consequence of air travel. But Mount Illimani towers over the horizon at 6000+ meters. I was told the airport at La Paz has one of the world’s longest runways because aircraft require so much extra time and speed in the thin atmosphere to take off. Only Potosi is much higher.

La Paz is modern in so many ways, with tall buildings and generally well-kept streets. But the traffic left the place paralyzed for much of the day. I walked instead, and found the sidewalks lined with merchants’ wares, from DVDs and blank cassettes to rows of pencils, stands selling little packages of cookies, gum, and crackers. Down the length of the Prado - the main drag - old colonial buildings punctuated rows of newer office buildings, and on the horizon behind all of the city I found rows of brick buildings and homes that climbed the valley walls to the mountain peaks above. If you could ignore the fetish market downtown selling all sorts of local witchcraft, you could almost think you were in the modern world.