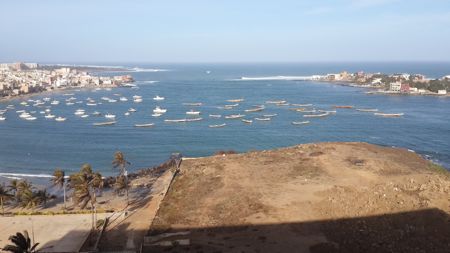 Ngor, just beyond a little channel whose twin openings to the sea permit the force of the Atlantic to pour forth in wavelets that meet in the middle in a chaos of interference: it’s an easy traverse by wooden pirogue, ending at the little island that makes for joyful Saturday beach excursions. But speckled with boats at anchor, protected by the worst of the sea’s excesses, it makes a nice paddling excursion, too. So starting in late fall of last year, I made a habit of putting my surfboard in at day’s end and paddling out across the current to Ngor and back.

It was a good workout for the arms and shoulders and therefore probably good for my surfing. It was also an exercise in Senegalese ecology, as the traverse sent me across a channel that, at its deepest, was probably only about ten or twelve feet in depth. That’s deep enough to drown in, and many Senegalese have drowned there due to careless pirogue captains overloading their vessels and racing back and forth in reckless competition with their colleagues. But, except for an instant when, as the tide turns and the sea begins to pull and the ships turn on their moorings, it was no stress for a competent swimmer on a fiberglass longboard.

One evening I got a late start, and the sun set while I was paddling. From the water’s edge, because on a surfboard your chin is at sealevel, I watched the sea turn molten, then dissolve into ink, as the Ngor village shoreline turned to silhouette, and then shadow. This, I thought, is awesome: I am one with the earth. 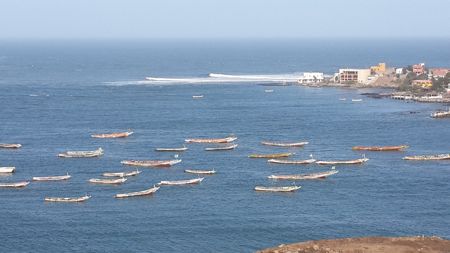 I had forgotten that between the earth and my chin lies a nation of Senegalese. The last time I made the traverse, the wind had turned after a storm, and the current carried the flotsam of the Senegalese Atlantic shoreline: bits of plastic, garbage, shreds of plastic bag, wrappers, the everlasting scum of a nation rich enough to consume junk, but too poor to bother dealing with its solid waste. “If someone asked me what it’s like to surf in Senegal,” I thought, “I’d tell them them to empty their paper pail into the toilet, and then swirl their head in it as they flush it.”

I go back, but rarely. The surfing beaches are slowly growing polluted too: Virage has a now-uncovered pipeline carrying sewage into the sea; the whole stretch of Yoff carries the runoff from the Parselles Assainies, and along the western flank of Senegal’s Presqu’Ile, nobody goes in the water south of about Mosquee de la Divinite because of the sewage. So goes any hope of a tourist industry based on beaches and sun - Dakar’s two most easily exploited resources.

That’s the traverse, because you are human: can you make it across and back? Can you make it without being consumed by the sea? But can you also slip across the sea leaving little more than the slit traced by the surfboard’s fin and the divots where your arms penetrated the sea’s surface? Because if you can’t do it without leaving a trace, it can’t last.