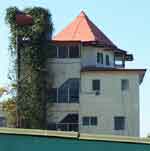 Plot for a Not-so-funny Sitcom: Pimpy-Aaaaarrr and Pimpy-Jay band together to write the first and best adventurer's guide to Nicaragua.  Pimpy-Aaaaarrr completes his work with the Corps of Engineers and moves out of his luxury crashpad in the wealthy Las Colinas neighborhood of Managua and packs up his office in the extravagant and colonial Casa Grande. Together he and Pimpy-Jay look for a place to live. They wind up at... Continue reading "The Pimp Tower" 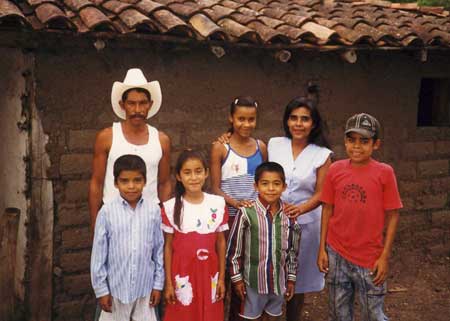 It was sustainable development at its worst. I should have seen it coming as soon as I noticed military vehicles parked in front of the San Diego escuela primaria, their olive drab and tan paint jobs doing remarkably little to camouflage them in arid, treeless San Diego. Inside the classroom, a half dozen American and Nicaraguan military personnel were debriefing a roomful of bewildered Nicaraguan eight-year-olds and their instructor. 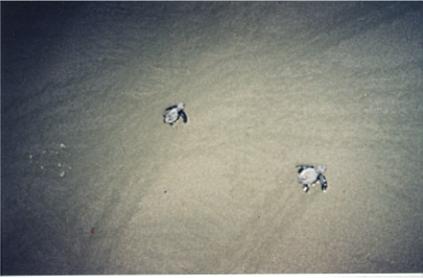 Two days away, Hurricane Mitch was already throwing increasingly bigger waves up on Nicaragua’s Pacific shore. The sky had been erupting in half hour intervals and the storm winds made no sign of diminishing. Tumbling down onto the beach, the gang joined a crowd of Nicaraguans gathered around the still form of Lepidochelys olivacea, the Nicaraguan Paslama turtle. At two hundred pounds and nearly four feet long, she was beautiful and inspiring, dull colored but still glistening with sea water.

Dumptruck was getting nauseated by the poaching. "I can’t watch anymore," he said dejectedly. "It’s too damn depressing. Ten billion chicken eggs in this damn country, and they’ve got to eat the turtles’ only hope for survival."

But Spider had gotten an idea. I first visited Managua in 1998. I was living in a quiet pueblo a half hour’s drive up into the hills above the capital, but traveled to the capital once a week for training and errands. But trips to Managua were exciting because of the chance to see friends again, not because it was an exciting place to spend time. Rather, Managua was dusty, chaotic, expensive by the standards of every other Nicaraguan community I was familiar with, hard to navigate around in and harder to appreciate.

Who’d have guessed I’d eventually make it my home?

Today, as Managua stretches inexorably southwards, its layout reflects its violent history: The ruins of old Managua remain at the water's edge--from there, in all directions, spread hundreds of shapeless, characterless barrios that rose from the rubble after each new natural or manmade disaster. Along Carretera Masaya, pricey shops, clubs, and restaurants continue sprouting up to service new neighborhood developments of the wealthy. The following are some thoughts on Managuan development: Continue reading "Managua Rumbles On" When you've finished the book, the manuscript has been edited, and you're signing copies, it's easy to forget just how much work went into transforming your idea into a finished product.

Here's the calendar and timeline Joshua and I published back in 2002 when we were writing the first edition of Moon Handbooks Nicaragua. Who says being a published author is glamorous? Continue reading "Moon Handbook 1st edition calendar" 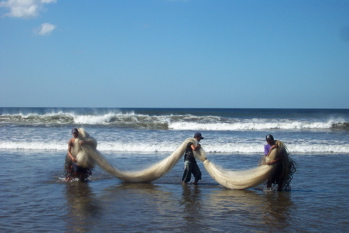 My wife Ericka and I never miss an opportunity to visit El Transito, the little fishing village on Nicaragua's Pacific shore where her family maintains a beach house. It's a special place to Ericka, rich with childhood memories, and always a place where she feels at peace with the world. Lacking those same memories, I don't tend to see it with the same degree of enthusiasm.

I first visited El Transito with Ericka's family in July 2000, when we explored the rocky promontories that make up the coastline and body surfed in the strong waves of the Pacific. We avoided the town, generally, except to visit the acopio (the fish repository where the daily catch is accumulated and transported to market) to buy the day's meal, usually thick red snapper or similar. Six years later, we still visit the little beach town regularly and it is for all practical purposes, the same. Continue reading "The Daily Catch at El Transito" 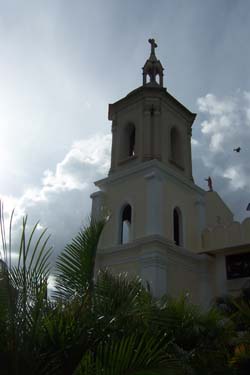 January 2001. I'd completed my service as a Peace Corps volunteer in the dry mountains north of Estelí a year previous, and returned to Nicaragua from a brief shopping trip to the States with a Compaq laptop running Windows 98 SE, a 12 string guitar, and a whole lot of enthusiasm for a modern lifestyle in Nicaragua's unassuming capital. The Internet had become huge in the quiet years I'd spent in the mountains. I'd been essentially glad to give technology - computers, specifically - a miss in all that time, but after such a prolongued drought of information and intellectual stimulation I was thrilled to be able to connect to the Internet and feel my horizons expand. Continue reading "Birth of an Era - Linux comes to Nicaragua" 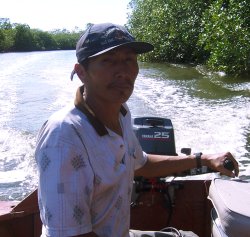 If you could go back in time about 500 years and walk up the shoreline of the Estero Padre Ramos (on Nicaragua’s Pacific Shore) you would meet someone like don Carlos. A slightly built man whose layers of tight muscle are stretched taut over a wiry frame, Carlos is laconic and polite, thoughtful and austere. His hand on the tiller of a 25 horsepower Yamaha outboard he carried down to the shore on his bronzed shoulder, he carries us out into the estuary and up the tributaries that carry fresh water down into the mangroves and the wetlands that make up one of Nicaragua’s most gorgeous corners. Indigenous traits feature strongly in his features, from the sharp black hair to the high cheekbones. He chooses his words carefully, feels strongly about the estuary, which has been his home since his childhood, and his family’s home for many generations before that.


“There’s good fishing up in that area,” he gestures with one hand, “but there are ‘gators too. We found one as long as this boat – about 8 feet – including his tail. Guess he likes the small birds.” If there are other good fishing spots, Carlos doesn’t mention them, but it’s not because we are competition for his family, who has lived off the sea for generations, it’s because there is no need to say it. His gaze wanders out to the mouth of the estuary, where sea surf pounds on the labrynth of shifting sandbars that delimit the edge of the Pacific. “That’s where we found the drowning victims,” he remembers. A fisherman by trade, drownings are part of the seascape, but these were different, illicit Peruvians bound for California and the undocumented labor pool. Their boat capsized in the surf at night, and all of them – about a dozen – drowned. Continue reading "Lazy Days on the Estero Padre Ramos"

On 23 February 2006, I spoke to a standing-room only crowd at Candidas World of Books in Washington, DC. Well over 40 people stopped in to buy an autographed copy of Moon Handbooks: Nicaragua, and to hear my thoughts on political stability, hot travel destinations, and the ins and outs of traveling in Nicaragua. Continue reading "Randy at Candida's World of Books" 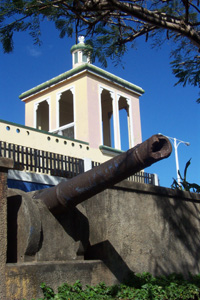 “Face it, Nicaragua is the ugly house on the prettiest street in the neighborhood,” said Charlie with a laugh. We were talking about the real estate boom in Nicaragua, which continues to expand at an unprecedented rate. Judging by the number of tevaed and slightly sunburned gringos gawking at the listings outside his office, he was right. Charlie’s a trooper and a veteran in the real estate boom that started just a couple of years ago and now runs the risk of imploding under the weight of all the real estate agencies it has spawned, eager to dine on the growing feeding frenzy that is Granada.

It’s hard for me to comprehend just how dramatically Granada has changed even since I first encountered this once-sleepy colonial village as a Peace Corps volunteer in 1998. Fast forward eight years and Granada has undergone a transition worthy of a prodigal son. Continue reading "Granada's Real Estate Boom" Cavernous and cacophonous, if you can't find it for sale at Huembes, it's probably not sold in Nicaragua. Second in size (and in danger) only to the open-air Mercado Oriental, Huembes is a good place to get out of the rain on gloomy Saturdays to check out handcrafts in wood, leather, shell, and clay, to eat bowls of hot soup, and pick up some fresh vegetables to last you through the upcoming week. Full of the exuberance, color, and life that so typifies Nicaragua, Huembes is also a good place to remember why you're in Nicaragua anyway, in case you'd forgotten. 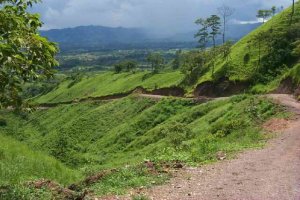 Nearly vacant a decade ago and site of several brutal confrontations during Nicaragua's civil war, the Pantasma valley has grown rapidly to become a major source of bananas and sweet oranges for national consumption, and a treasure trove of war stories and old ghosts.

If you don't let the rainy season intimidate you, an old German vehicle like the IFA above will carry you through the valley and north into the mountains of Nicaragua. 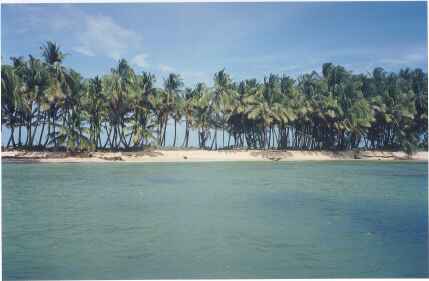 One of the Pearl Keys, in the Caribbean Sea. Tropical paradise. 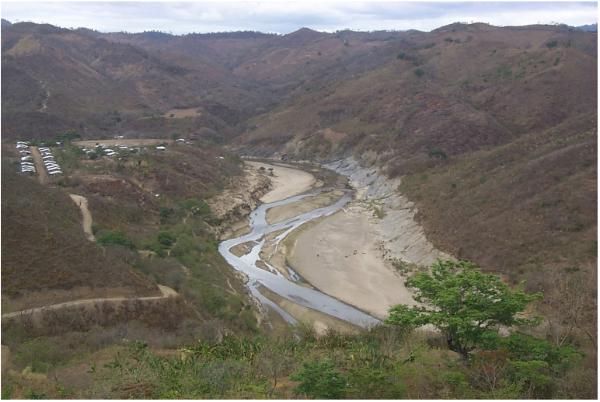 The dry season means even the rivers go dry, and the cattle grow boney-looking and meager. This shot is of the Coco River during the dry season, when the meandering waters change course from day to day. Continue reading "Dry Season" 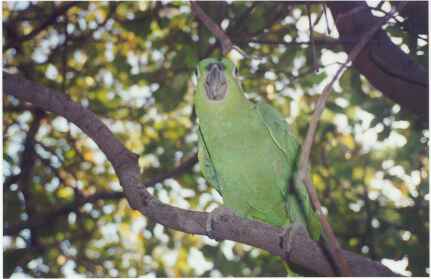 Mulukuku ("moo-loo-koo-koo") came from the eastern mountains of Nicaragua to take up residence in the Cashew tree ("Marañón") at my house.  I named her after a small town in Matagalpa whose Indian name has long since lost its meaning.  And Mulukuku, in exchange for bananas, mangos, and bread-soaked-in-milk, provides a loud parrot-style wakeup call every morning at sunrise.  What more could you ask for in a pet? Continue reading "Mulukuku"