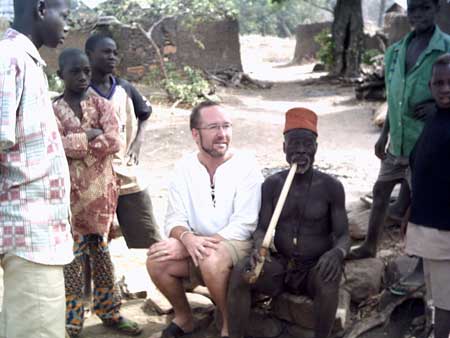 The little village lie not far from the highway by Djougou, and we had enough fuel and enough daylight to make the little side trip worth our while, so we turned west off the highway and bumped our away up into a little valley of the Atakora Mountains to see the Tanéka people. Writes Stuart Butler:

"The villages are moulded on to the rocky hillsides that start to build up to the north of town … [they] appear from a distance to be just like any other African village, but once inside the middle of them you will realise that all of the buildings are actually far smaller than you originally thought and it’s hard to believe that anyone can fit inside the houses."

We parked at the edge of town and negotiated with a pair of young boys to lead us through a Tanéka village, one of Benin’s more remarkable and more traditional communities. Indeed, the little round adobe huts, built in small clusters and each one bearing a low entranceway and a straw roof, were tiny. Most were only about 8 feet in diameter and I had to crouch low to enter. Inside the floors were packed dirt and the air was cool. It wasn’t hard to justify the economy in building materials, given the rocky hillside and the paucity of clay soil to build with. Rather, the little community had been built at the center of its fields of manioc in places where the stones had been cleared away. One of them had been consecrated as a family tomb. Each person was buried in a common pit at the center of the dirt floor on which a stone tablet had been placed. Around the round walls of the little structure one horned cow skull represented the soul of one of the interred. I counted at least twenty of them.

At the village’s edge an enormous baobab held dozens of sleeping fruit bats. "We eat those," grinned one little boy at me.

"How do they taste?" I asked, trying to look unfazed.

"Delicious. Here, I’ll shoot one down for you." And he pulled from his pocket the mainstay of 8 year boys around the world: a sling shot. I convinced him not to bother on my behalf while his friends all giggled at me. Most followed us in dingy underpants or ratty shorts, but one little boy was stark naked. We’d noticed him as soon as we pulled up at the edge of town. "Such poverty," I thought, "where an unfortunate kid can have no clothing at all and walk around streaked with village dust." I soon learned I was quite mistaken. 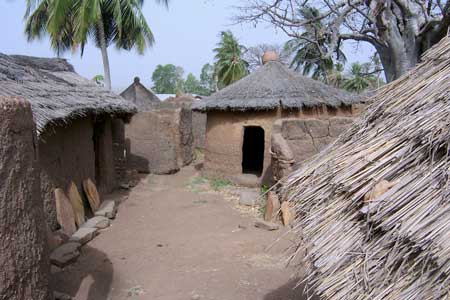 The children took us to a gnarled tree at the center of the village under which sat an old man in a woven fez and a sort of loincloth, smoking from a long carved pipe wrapped in goat skin. "That’s the king," they explained to us. "The king must remain unclothed if he is to rule. The day he covers his body is the day he wishes for us to govern ourselves. That little boy is his son, who will be the next ruler." And they pointed at the little boy with his peepee hanging out. "He can’t wear any clothes either, like his father."

"The king is a wise man," they told us. "He’s ninety years old, but he doesn’t look it, does he?" Leather-skinned, the king smiled at us through gapped teeth while grey smoke curled from the bowl of his pipe. I reckoned he was more like 45 in a nation whose average life expectancy was only 39. But who cared? The king beckoned us over and offered me his pipe. Whatever he was smoking was acrid and pungent and grassy. The ashes glowed deeply in the bowl. "He has the right to only one wife at a time, and no more than three children. Whenever there is a problem in the village we bring it to him and he tells us what to do."

The boys led us through the rest of the village along the stony edge of the hillside and back to the mango tree where we’d left the car. Some of those boys would change into those school uniforms and go off for the afternoon session of classes, others would work the fields. And one of them would grow up to be the next king.

It was hard not to be impressed by the simplicity of the village life. Never mind the superstition, the rigor of community, the constant observation, the loss of individuality. It seemed to me that a few hundred people living and working in close proximity to each other and the interweaving of lives and destinies that we now call a village, was humankind stripped down to its most fundamental elements, much like the king without his robe. Even in our largest modern cities we immerse ourselves in small communities and find meaning in friendship and family. Life was short and brutal in poor northern villages of the Sahel. But somehow it was rich in meaning in a way that made it worth living, and even in death you remained at the center of the village for as long as the memorial would guard your soul.

Postscript, 2014:This anecdote about the bat is a lot less charming now that we know the Ebola virus was transmitted by the consumption of bush meat and bats in particular.