The Harmattan descends upon Benin in a pale, chilling mist, obscuring the horizon, blotting out the buildings in other neighborhoods, and filling the air with choking dust. No other season I’ve experienced, from the monsoons of Southeast Asia to the 6 month Central American drought, is as oppressive. It’s hard not to be impressed by just how powerful the Harmattan really is, and in Benin, the Harmattan is not just a wind, it’s a season.

In West Africa, the Harmattan, a punishing, chill wind that rises out of the Sahara carrying dust, debris, and sand, is seasonal. As the rains taper off in late October a momentary pause ensues, as though the land is taking one last gasp of breath before passing underneath the wave, and then the Harmattan pours out of the north. The winds are surprisingly cold for Africa, and originate deep in the rocky folds of the Sahara desert. In Mauritania, which is the Sahara desert, the Harmattan winds are heavy with grains of sand that can all but strip the paint off of cars. In the Sahel and even Benin’s dry northern provinces the Harmattan is thick and grainy. But by the time the winds reach the coastline, much of its violence has been stripped and it becomes a penetrating, choking dust. 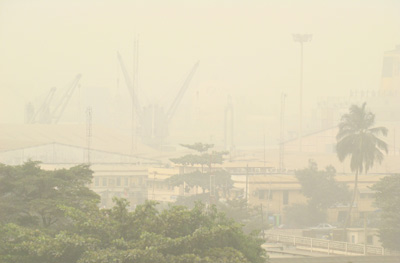 Nothing keeps out the harmattan dust. You find it throughout the interior of sealed vehicles. Homes whose every window has been sealed accumulate a patina of the dust on every horizontal surface. A single day’s accumulation is enough to write your name in, and the whole outside world takes on a dismal, gray aspect. Computer hard drives develop an anxious clatter, dust appears on the inside of objects one once thought impenetrable. The harmattan brings illness as well, for the dust carries traces of everything humankind burns, dried fecal matter, and microbes of all sorts. On every side our friends suffer from respiratory infections, pink eye, and dry coughs.

The harmattan blows across the Sahara filled with red dust, dust as fire, as flour, entering and coagulating in the locks of rifles. Mariners called this red wind the "sea of darkness". Red sand fogs out of the Sahara were deposited as far north as Cronwall and Devon, producing showers of mud so great this was also mistaken for blood. "Blood rains were widely reported in Portugal and Spain in 1901."

But the harmattan has two graces: the north winds sculpt the waves along the Atlantic Coast into much appreciated tubes that break thinly over the bar, and the sun sets every evening in a rich mahogany glow. Then suddenly in early March, the Harmattan vanishes as quickly as it arrives. From one day to the next, the air takes on a more humid, heavier sensation, laden with the taste of the Atlantic. The wind shifts from the north to the southwest, and the sky clears. The first blue skies are enormously appreciated, but with the clarity comes the heat of the African sun. The temperature rises, rises, and rises, until the first rains, building slowly off the coast, blossom over us and soak the earth. 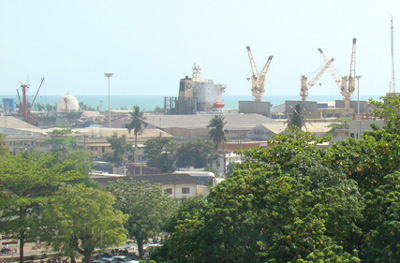 It’s increasingly easy to ignore the world of natural forces, remaining connected over the Internet and coddled in air conditioned interiors. The Harmattan breaks that cycle, forces you to look up from your desk, chokes you as you walk home from work. Its message is simple: nature remains bigger than any of us, more powerful, and unforgiving. We ignore it at our peril.