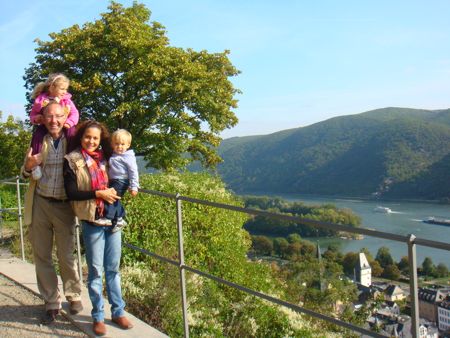 These are pictures we took in Bacharach, the heart of Germany's gorgeous Rhine Valley ("Rhein" in German) and an important wine-producing region. We spent two nights there enjoying the site of the river (fast moving, and really churning at the banks), hiking up the hillside to the old castle (now a youth hostel and full of camped-out teenagers), and enjoying good schnitzel and sauerkraut.

But Bacharach had some surprises too:

Halfway between the castle and the riverside town stood the stone walls of a small cathedral, the Gothic Wernerkapelle, partially constructed 700 years ago but never finished. The windows sills were ready for glass, the walls were solid, but it was open to the sky, and the floor was nothing more than packed earth. Imagine the quality of the workmanship that a project left unfinished, can remain standing since 1287 without damage or degradation1.

Bacharach was built up on the silt flats along a bend of the river, a testament to a world in which rivers were the principal highways for transport and commerce. Judging by the number of barges we saw navigating the river, to some degree, they still are. 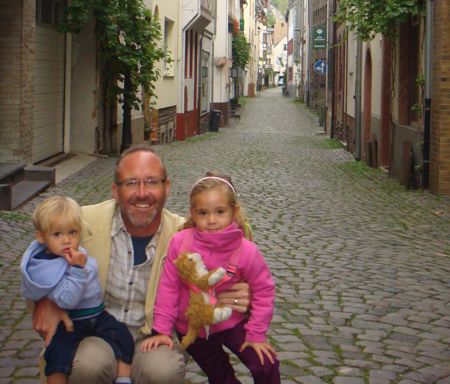 Turns out, we weren't the only ones who found Bacharach mesmerizing. Imagine our surprise when we were shopping for a jigsaw puzzle, and found this one sold by Ravensburger. Of course, we had to choose it! (It was a darned hard puzzle, too: all that foliage was a nightmare to put together). 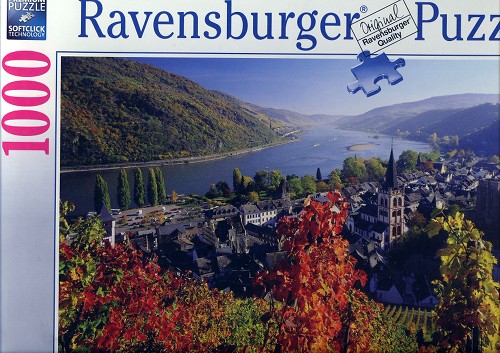 1) Turns out, the fact that it's still standing is culturally important. The death of Werner, ostensibly by Jews, led to a violent pogrom against Bacharach's Jews. The church remains as a testament to the importance of living peacefully together.