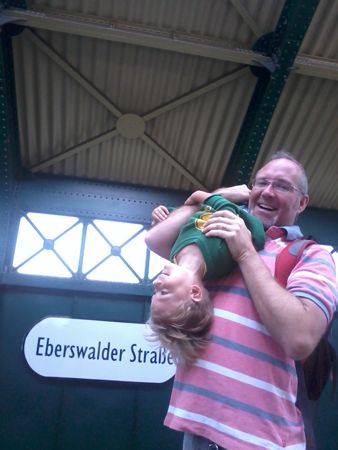 September, 2013: Berlin, the city we skipped the last time because it was too long a train trip for the kids. Ericka, whose name was chosen by a father who though he admired the place. Diego and Valentina, world travelers and both so blond they fit right in without any German so much as casting a second glance in their direction. So it was as we landed in Shönefeld Airport, the airstrip that previously serviced East Germany.

My German is as poor as it was the last time in Büdingen in 2011, and yet my map-reading and orientation and baby vocabulary get us by in good steed, and so many Germans speak lovely, schooled English anyway that it hardly matters. Still I'm happy to be able to communicate – though poorly and certainly in rudimentary phrases – with our taxi drivers and the like.

We have traveled here with nearly no expectations, and in full understanding we'd forego the provocative museums and sights and thought-pieces, in lieu of afternoons on the swingset with happy kids. 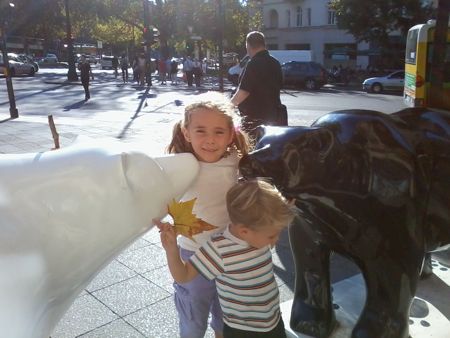 And so it's been: a full day at the Berlin Zoo on our first, rainy excursion out and about. As expected, Berlin is clean and well-organized and excruciatingly well thought-out. Not even a full generation from Communism and the fall of the Wall, Berlin seems intensely introspective, conscientious, determined. We did see pieces of the wall: stunningly iconic of a Germany I never understood or even cared to know. Now I do. Is it awful to find oneself nostalgic for the relative simplicity of the Cold War, when the "enemy" was at least well-identified? It's chilly on an early fall evening, and the cool wind warrants a light jacket and a warm meal if not a tall, dark beer. 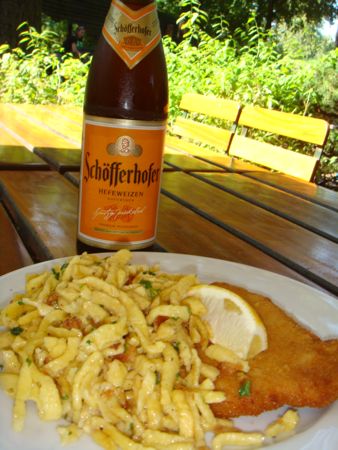 Fortunately, these are things at which Berlin excels. We wanted a break from poverty, ethnicity, incompetence, disorder, the filth and disfunction of Senegal and the stench of its open, running sewers. Berlin has been all of these things, and more: such a green place, with well-tended maples and sycamores lining almost every street. As always, I – or we – approach the place from the question, 'could we live here and make it our home?' There, Ericka's a fish out of water in the Germanic language and culture, but I can imagine it: late autumn or early winter, collar turned up against the stiff wind, journal and pen in the inner pocket, leather satchel over the shoulder, and the smell of tobacco wafting along the sidewalk. It's seductive, because everything else around me works, from the transport to the machinery to the organization of civil life. In fact, the trip to Berlin reminds me that perhaps the chapter of life I devoted to the developing world is drawing to a close. Increasingly, I wonder if poor countries are poor because they're simply not good at much and can't organize themselves in a way that gets anything done. These are easy questions to answer with a plate of schnitzel and a tall glass of impeccable dunkelsbier in front of you and when, on every side, you are faced not with the challenge of want but by the marvels of what the human mind is capable of.