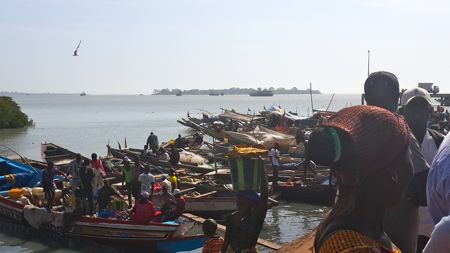 The wheels of our 20-seater aircraft clattered to a halt at the Oviedo airport, and we stepped out into the tropical heat. Guinea Bissau, and I was here because hell, when else would I have a chance? I reel at the absurdity of the situation, and yet Bissau was a wonderful surprise and I returned "home" a few days later charmed indeed.

Maybe it was the tropical greenery, a welcome cry from the sparse sterility of the Sahel: mangos and coconut palms towered above us and the entire city – a village of 400,000, really – was tufted with trees and plant-life. Stains on the concrete alluded to a humid life at riverside; deep concrete ditches along city streets evoked the torrents that would run through them when the rain clouds gathered and the sky blackened in the rainy season. I know those rains well from Nicaragua, and in fact the more I reflected on it, the more Guinea Bissau reminded me of Nicaragua's Caribbean coast: the greenery, the red soils, the lacustrine ambiance, the bright fabrics and dark skin.

The night air was cool and clean, and by serendipity I was there under the light of a full moon that turned the mango trees into shadowy giants raucous with birdsong. That freshness remained well after the sun rose into a cloudless sky. Beyond the snarl of mangroves, the Geba River flowed almost imperceptibly out to the Atlantic, choked with fish that breed among the mangrove roots. "Bissau is poor," my guide explained, "but no one goes hungry: everyone can eat a big fish." In the fish market I heard the sounds of Wolof-speakers from the north, but I knew the place was full of Mankays and Peulh, and the rest of Bissau's 41 ethnic groups, a jumble of animists, Catholics, and Muslims as complex as the multiple colors in their fabrics. And for every wrinkled grandmother in a shapeless cotton shift I saw a defiant teenager in tank-top and denim miniskirt; for every elder limping with the aid of a crooked, wooden cane I saw a youth with over-sized headphones and a t-shirt boasting about California or soccer or a rock band.

I'd come to Bissau imagining the little I knew of the place would define it: growling drug lords would cruise by in expensive cars, weaponry bristling; the gorgeous Bijagos archipelago would buzz with the outboard motors of Colombian traffickers; I'd be threatened on all sides by dangerous men better armed than me and hostile with unconcealed aggression. Instead I found a warm and friendly people who have suffered both at the hands of their government and their military. I found them lounging around tables in the cafes, smoking cigarettes and gossiping over espresso, or sitting on the rain-pocked front stoops that fronted the quiet streets. Women scrubbed at clothing on corrugated wash boards in galvanized pails; goats and pigs rooted in the gardens; small plots of urban manioc waited the final month before the rains for a renewed planting. The church bells hung silently in the tropical torpor of mid-day. The poverty of Bissau formed its character, of rutted earthen ditches for conveying rainwater, the buzz of the afternoon, the hot sun, the sense of a broad, green interior.

Across the broad, tiled roofs that silently told the story of Portuguese colonial occupation, under the shade of the enormous mangoes towering over the village roof line, beyond the grubby port and the ancient colonial fortress that still seats the all-powerful military, lie the same river that has flown from the African interior to the sea before anyone ever thought to call this lovely place home. And I know several that have done just that.