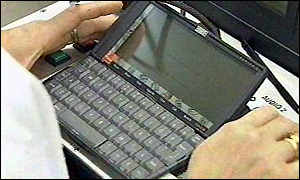 In 1997, a small electronic device that could have revolutionized the writer's world was created in the research department of a small British company. It did come to revolutionize the world of electronic pocket gadgets but was quickly overcome by another company's products. The device was the Psion 5 and later, the 5MX. The reason it was quickly overcome was because it was marketed not to writers but to businesspeople, and not as the world's lightest laptop but as an agenda and personal digital information organizer, the very class of device that would later come to be known by the name of the device that would dominate the market: the palm pilot.

In many ways the Palm Pilot and successor models of Palm, Handspring, and similar competitors were superior to the Psion, but in others the Psion remained unsurpassed. One of those was the Psion's utility as a word processor so small you can fit it in your (jacket) pocket, and so well-designed it runs on two double-A batteries for weeks at a time. Its strengths as a word processing device for writers include: